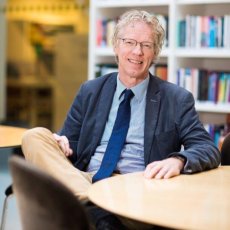 Henk de Roest was bom May 31st, 1959 and studied philosophy of religion and practical theology at Leiden University. He was ordained minister in the Dutch Reformed Church in 1987, serving two parishes just north of Amsterdam: Holysloot-Ransdorp and Durgerdam (1987-1995) and from 1995 Monnickendam (1995-1999). In 1998 he obtained his doctorate with distinction at Leiden University with a thesis called 'Communicative ldentity. Jürgen Habermas' Perspectives of Discourse as a Support for Practical Theology' (Kampen: Kok), 396p.

From 1999-2001 he was Lecturer in Practical Ecclesiology at Utrecht University. From September 2001 he held the Chair of Practical Theology at Leiden University and from January 2007 he holds the same Chair at the Protestant Theological University, from 2012 location Groningen.

From 2012 to 2014, I participated in a EU-project, receiving a EU-Grundtvig-grant for a life-long learning project on multiculturality and interconfessional and interreligious bridge-building. The target group consisted of local church leaders from six different countries. A one-year research phase was followed by national and international workshops. See: www.cultaproject.eu. Other participants were MF School of Theology (Oslo), University of Sofia, University of Craiova, University of Tallinn and EUROPE-Direct (Reggio Emilia).

November 2012, at the PThU in Groningen, I created a platform for research with congregations (CCC, see below).

In 2012 we started a new research platform in Groningen: CCC (Connecting Churches and Cultures). In conversations with experts in the field, like Helen Cameron, Clare Watkins, Jim Nieman and in lengthy converstations with three of my PhD students, Veerle Rooze, Christiane van den Berg-Seifert and Jacobine Gelderloos-Commandeur, it became clear to us that we should not wish to perform research on behalf of the churches or for the churches but with the churches, that is, with the congregational leadership, church councils, pastors and with the congregations or parishes themselves. We should also include the advisors to the congregations and the classical assemblies, in a network organization. Gradually in our imagination, we saw the emergence of one large, regional, community of learning. In potential it could consist of all of the 681 protestant congregations in the provinces of Overijssel, Drenthe, Friesland and Groningen. Research, for the academy and the society, but also for the benefit of the churches, in order to foster their flourishing. Our research at the Protestant Theological University Groningen would not only be connected incidentally but would be rooted to the congregations in its context. And also for the benefit of congregational consultants, to improve their competences and to be of assistance in the processes of accompanying the local parish and classical assembly. Indeed, to be accompanied by an external advisor, a critical friend, often stimulates change and the creation of new forms of communicating with the cultures in which a congregation is embedded.

Until now, the platform has organized research meetings, focus group sessions, and had individual senior and junior researchers perform research tasks with congregations.

CCC-themes: 1. Local churches and people in their twenties and thirties; 2. Shrinking resources and still be a vital congregation; 3. Earthquakes in the Groningen soil: how can local churches respond? 4. Liberal congregations in the province of Zuid-Holland: what is their future? 5. The future of a small orthodox congregation in a village in the province of Groningen; 6. The impact of a congregation on the social vitality of the countryside and the open space of a village church; 7. Interreligious dialogue and interreligious cooperation at grassroots level.

Ecclesial practices. Journal of ecclesiology and ethnography (publ. by Brill)

The story of the origin of the Journal: In 2012 I started conversations with Brill Publishing House in Leiden to publish an international, anonymous peer-reviewed journal for empirical, ethnographic and qualitative research in (and in our case with) congregations. We need to valorize and disseminate our insights. The preparations to start with this journal took over a year. Early 2013 I wrote a first draft of a proposal to present to Brill, with the rationale. In June 2013 a close collaboration was established with the Ecclesiology and Ethnography Network, in particular with Pete Ward and Paul Fiddes (see: https://ecclesiologyandethnography.com).

Pete Ward contributed a lot to the final proposal. After extensive reviews and positive assessments, March 2013 the Board of Brill decided to publish the journal. November 2013 Ecclesial Practices, Journal of Ecclesiology and Ethnography was launched at the American Academy of Religion in Baltimore. Since 2014, the Journal is flourishing! Rein Brouwer and Malan Nel are book review editors. Currently, Paul Fiddes (Oxford University) is deputy-editor. There are two issues each year, that include articles and book reviews. Please ask your university, seminary or college library to subscribe!