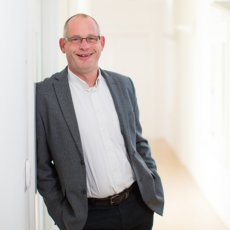 Rick Benjamins (1964) is professor of Liberal Theology at the PThU Amsterdam. His main interest is in liberal theology and postmodernism. He studied theology in Groningen and Marburg and wrote his dissertation on Origen of Alexandria. From 1993 until 2008 he was a Church-minister, since 2008 he is a full time academic.

As an academic Benjamins published in German and English, but the main part of his work is in Dutch, which is not a matter of pettiness but of being contextual. As a minister he was one of the founders of 'Op Goed Gerucht', a movement of progressive ministers who want to keep in touch with post-Christian and post-secular culture; as a professor of liberal theology he co-initiated 'The Liberal Lecture' as a means to present relevant theologies to a broader Dutch audience.

To get to know his position between liberal and postmodern theologies, it may be best to look at his responses to John Caputo, Peter Rollins, Catherine Keller, Jan Olav Henriksen and Graham Ward at various occasions over the last few years.

Read a short introduction to his books.

Rick Benjamins was born in 1964 in Hoogeveen. He studied theology in Groningen and Marburg from 1983 to 1989 and obtained his doctorate in 1993 with a dissertation on the theology of Origen. From 1993 to 2008 he was pastor in the Reformed congregations of Middelstum and Huizinge, the Protestant regional congregation of Maas en Waal and the PKN congregation of Heemskerk. In the presbytery he wrote his books 'A gentle kind of being' and 'One and Other'. From 2008 he teaches dogmatics at the PThU. From September 1, 2012 he was professor by special appointment at the RuG on behalf of the VVP with the teaching assignment "liberal theology: development and impact from the 19th century to the present". From September 2022 het is full professor of liberal theology at the PThU. As a pastor he was involved in the foundation of Op Goed Gerucht: a movement of pastors who are willing to accept the secularization and find the bond between church and culture of great importance. His main focus is on the modern or liberal theology of the 19th century and the developments in contemporary postmodern theology. Rick Benjamins is married and has three children.

'Deeply religious and scientific'. Piety and rationality in liberal theology