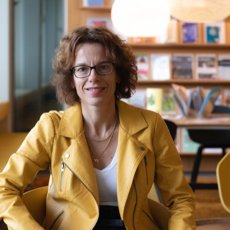 Lieve M. Teugels is associate professor of Semitics and Jewish Studies at the PThU in Amsterdam.

Lieve Teugels received her doctorate in Theology at the KU Leuven in Belgium in 1994. Her research focuses on rabbinic literature, especially midrash. She teaches all aspects of Jewish literature and history, as well as biblical Hebrew. From 1994 until 2002 she was assistent professor of Judaism at the faculty of theology of Utrecht University. In 2000-2002 she was visiting scholar at the Jewish Theological Seminary of America in New York. She lived and worked as academic editor in the US until 2009. From 2014 to 2017 she was involved in the NWO project "Parables and the Partings of the Way". In this capacity she did research on early rabbinic parables and wrote her book "The Meshalim in the Mekhiltot". Since 2016 she works at the PThU.

Lieve is one of the driving forces behind the Centre for Early Jewish Hermeneutics and the Jewish and Christian Perspectives (JCP) consortium (with Tilburg School of Theology, Bar Ilan University, and the Schechter Institute). She is one of the board members and editors of the Brill JCP series. She is book review editor of the Journal for the Study of Judaism.

Lieve is the author of three books :

She is the editor of several volumes and conference proceedings, and the author of many articles, encyclopedia articles, and chapters in collected volumes.

Lieve is actively involved in Erasmus+ projects between the PThU and the Schechter Institutes in Jerusalem and Ukrainian Catholic University in Lviv.