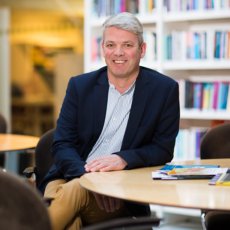 Henk van den Bosch was born on January 22, 1965. He studied theology at the Theological University in Kampen, where he obtained his doctorate in 2001 with a thesis called Adolf von Harnacks Lutherreceptie. In that same year he was ordained minister in the Protestant Church in the Netherlands. He served the Valkenburg congregation of the PCN from 2001 to 2005. On behalf of Kerkinactie, the mission department of the PCN, he served as lecturer and academic dean of Justo Mwale Theological University College in Lusaka, Zambia from 2005 to 2010. In 2010 he joined the staff of the Protestant Theological University as lecturer in ministerial formation.