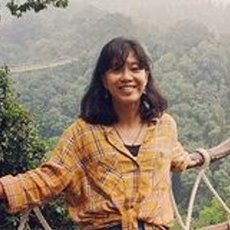 Erin Sinaga from Indonesia was one of the participants of the Bridging Gaps program from September through November 2019. In this period, she conducted research the liturgy of her denomination – the Lutheran Huria Kristen Batak Protestan (HKBP – in light of gender justice. Erin is an expert in missiology and liturgy who includes perspectives of women and youngsters in her work. She currently holds a master’s degree in theology and works for one of the largest Christian schools in Jakarta.

I wish to develop my knowledge on liturgy. My research was mainly focused on feminism, but to pay attention to the role of children is also very important to me. It is my job to create a liturgy that is accessible for the children who attend the school that I currently work for. This includes children in the age range 5 to 17 years old. How can we design a liturgy so that is comprehensible for both children and teachers? Sometimes, churches call me to ask if I want to lead Sunday school for their kids and teenagers or to prepare Sunday school leaders for their service.

I was ordained as a Bibelvrouw in the HKBP in 2011. In 2012, I decided to study at Jakarta Theological Seminary and I could no longer work as Bibelvrouw. Besides, I am disappointed in the HKBP and its leadership in particular. They have adopted a top-down approach in their leadership of the church, and gender issues are ignored. The leader is very important and the voice of the Bibelvrouw is marginalised. Sometimes, I get invited to preach in the Sunday service of one of the HKBP churches. Then, I accept that invitation. I hope to return to the HKBP someday, but for now that is complicated.

In Jakarta I was taught a lot about topics as gender, feminism, ecumenism etc. What I learned there is the root of the development of my own theological view. At Jakarta Theological Seminary we learned predominantly from books, but Bridging Gaps gave me the opportunity to find out how my theological view translates to real life.
Through the Bridging Gaps program I got to know people with other perspectives. At the VU we had classes about the use of the Bible. After these classes, we were with a small group of fellow-participants in the kitchen of the Student Hotel. We discussed about what we learned in class and I heard different perspectives. Some of their views were so patriarchal! Others were so conservative! How can I appreciate these other perspectives? And how can I explain myself sufficiently without upsetting others? I learned how to tolerate other people’s views and how to express my own view. This was not always easy, but it also taught me a lot.

One of the key elements of the Bridging Gaps program is to expose the participants to Dutch culture. Apart from visiting different churches, Erin also visited the house of Heleen Zorgdrager, the professor who supervised her research during the exchange program. Although Dutch people are known to offer their guests only one cookie when they have coffee, Erin had a different experience.

I went to visit Elst, where my supervisor lives. We were having dinner together and Heleen told me during the appetizer: “You should not eat too much of this, because the main course comes later.” All I was thinking was: “What?! I’m stuffed already!” After we had the appetizer and the main course, there was also a desert with ice cream, cake and drinks. I really tried to be Dutch and to eat a lot, haha!
Besides, when I was visiting one of the churches and stayed with a host family, they were also very hospitable. Geert, the man of the house, asked us what we wanted to drink when we were watching television. Then, he went to the kitchen to pour us a drink and returned to give it to us. In Indonesia, the women always serve the men, but now a man served us!
We learn from these little things and these are the things that stay with us.

Gender and feminism play an important role in Erin’s life, which is visible in her story thus far. This concerns, for example, her ordination to Bibelvrouw, the discussion in which patriarchy was recognised, and her observation that Dutch men can also prepare things in the kitchen. Gender functions as a leitmotif throughout Erin’s life story. She came to the realisation that appearances can be deceptive when it comes to gender in the Netherlands!

Heleen told me that I should definitely continue my research, for it is very important for women. I did not understand that my research topic was this important until her husband told me that women cannot be ordained in every church in the Netherlands. And here I was thinking that the Netherlands was such a modern country!
Heleen gave me a book by Sita T. van Bemmelen – a Dutch auteur – about colonialism and Batak women (Batak are different peoples in North Sumatra, red.). A couple of months ago, I met Sita in Bali and we had a conversation about gender and Batak women. I realised that I have to continue my research on Batak women, because of this meeting. For if Dutch people conduct research on Batak women, why don’t Batak women do this themselves? Now I know that my research is important!

What about the future?

I wish to continue my studies and I have been working hard to accomplish this. I hope that I can get a scholarship to study in the United States or the Netherlands. My participation in the Bridging Gaps program was my first international experience. Ever since my return to Jakarta, I have been able to share my experiences with my fellow-students here. Students want to know what we actually have been doing in the Netherlands. Now I can tell them that we do not only come to the Netherlands to explore the country, but to actually study together in an international environment. The Bridging Gaps program has been very valuable to me and I already talked with our dean about organising a similar program at Jakarta Theological Seminary. I really think we should do this!

Want to join the programme?Read the requirements and apply