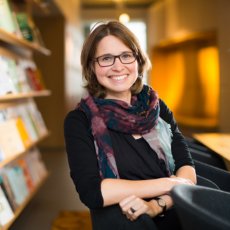 Ronelle Sonnenberg (1980) completed in 1998 secondary education at ‘t Streek (Gymnasium) in Ede. She studied theology at the Utrecht University from 1999-2005, after studying for a year at the Evangelical School in Amersfoort. As part of her studies, she spent five months at the Theological Faculty in Pretoria (2005). She was trained for ministry at the Protestant Theological University (formerly ThWI) in Utrecht (finished in 2006). Since September 2006 she has focused her research on youth and faith at the Research Centre of Youth Church and Culture (PThU). Since September 2008 she has worked on the dissertation 'Youth Worship in Protestant Contexts' which is defended in February 2015. She worked as a coordinator of the Research Centre of Youth Church and Culture from 2006-2019. In January 2008, Ronelle was ordained as a minister in the Protestant Church in the Netherlands. She worked as a minister in Doorn (2008-2013) and Alphen aan den Rijn (2013-2019). Since 2019 she has worked as assistant professor Practical Theology.