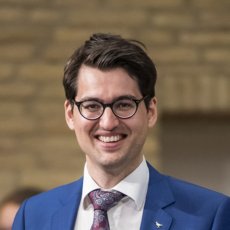 Martijn Stoutjesdijk (1989) studied theology/religious studies, philosophy, history of the Ancient Near East, and international relations in Leiden and Utrecht. After working for a short time at a high school and in a commercial position, he was appointed as a PhD researcher in the project 'Parables and the Partings of the Ways' from 2014 to 2020 (see www.parabelproject.nl). As a PhD candidate, he studied the use of the slavery metaphor in early Christian and early Rabbinic parables, but during his PhD project he also became increasingly interested in the role of Christianity and Judaism in the Dutch colonial slavery past. On the latter subject, he wrote a prize-winning essay in 2020. In the spring of 2021, he received his doctorate for his thesis "Not Like the Rest of the Slaves? Slavery Parables in Early Rabbinic and Early Christian Literature (see here). From February 2022 onwards Martijn will be a postdoc at PThU investigating the theological/exegetical traditions/narratives that were used in the Dutch colonial empire to legitimize or criticize slavery.

Next to a number of articles, Martijn has published the following books/volumes:

For a complete overview of his publications and work experience, see his CV and his personal website.