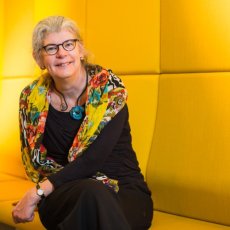 Anne-Claire Mulder is Stagedocente and UD (associate professor) for Women’s and Genderstudies Theology at the PThU-Groningen.

In 2000 she defended her PhD at the UvA – Divine Flesh, Embodied Word. Incarnation as a hermeuntical key to a feminist theologian’s reading of Luce Irigary’s work. (published by Amsterdam University Press in 2006).

From 2003 until today she works as UD for Women’s and Gender Studies Theology at the Protestant Theolgical University, first in Kampen and since 2012 in Groningen.

From 2012 onwards she is also stagedocente at the PThU in Groningen. As stagedocente she coordinates the traineeships of the students who are training for the Ministry in the Protestant Church of the Netherlands and/or for Spoiritual Care, and she coaches these students during their traineeships.

Her research interests are: