Recently, I was in Vlissingen, the Netherlands, and took a walk along the “Green Boulevard.” This walking and cycling route goes along the Westerschelde from the train station to the center of Vlissingen. Along the way, there are several monuments that recall the Battle of the Schelde that took place there in 1944. I was not looking for war monuments, however, but for a certain environmental monument.

Martin walked alongside the Westerschelde. This photo shows the National Environmental Monument in Vlissingen on the Oranjedijk. Picture by Martin Hoondert.

Photo below by Dolph Cantrijn.

Monuments have various functions. They often recall historical events or persons or are—implicitly or explicitly—an expression of protest. The German language has two words for these different types of monuments: Denkmal for monuments with a remembrance function and Mahnmal for monuments expressing a warning or protest. The distinction cannot be drawn very sharply, but the differentiation based on the primary function of a monument seems useful to me.

It is clear that the Environmental Monument in Vlissingen is a Mahnmal. It not only reminds the viewer of the environmental disasters that have taken place but also warns of their consequences and calls for a more careful treatment of the environment. The monument is not beautiful; the black, congealed oil drop immediately evokes memories of oil-polluted beaches and water birds with oil-stained wings. 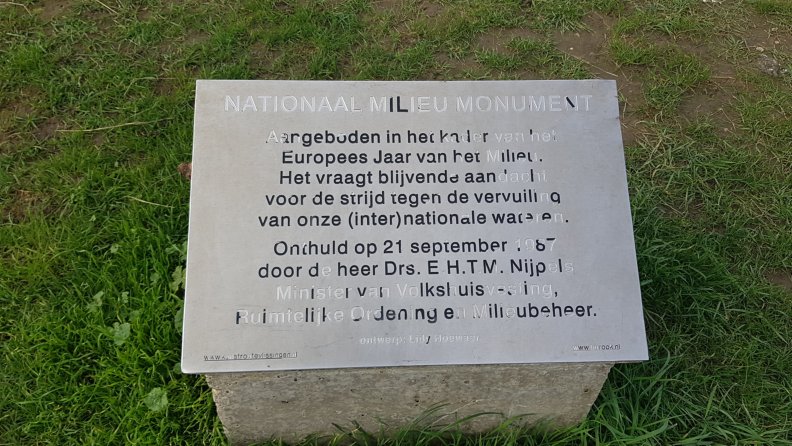 The weathered explanatory sign at the National Environmental Monument. Picture by Martin Hoondert.

A few years after its unveiling, the monument was moved, and in 2014, it was placed in its current location. It now stands on the Green Boulevard, near the Inner Harbor Locks. I must honestly confess that even though I was looking for this monument, I initially walked past it. I had seen a “black shape” but had not recognized it as a monument. It was only after consulting Google Maps that I realized I had walked past it. I am, I suspect, not the only one who somewhat carelessly passed by the Environmental Monument. The explanatory sign placed there is weathered and only partially legible. The monument no longer mahnt. That is the fate of many monuments: after placement, they slowly but surely become invisible. Austrian novelist and philosopher Robert Musil wrote as early as 1936, “Nothing is so invisible as a monument.”

The monument no longer mahnt.

To prevent this, rituals are needed: an annual commemoration or protest march to keep the function of the monument alive. I suggest that for every environmental disaster anywhere in the world, the minister responsible for the environment should visit the Environmental Monument in Vlissingen, and the place and year of the disaster in question should be written on the monument. This will be an uncomfortable ritual—an act we would rather not perform and not see. But it must be done, time and again...

About the Environmental Monument: http://www.kunstinvlissingen.nl/1987/09/21/lidy-hoewaer-milieumonument/.