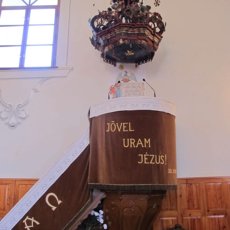 In 1995, after the end of the Cold War and the apartheid era in South Africa, IRTI was founded as a global network of academic theologians who developed their theology in conversation with the Reformed theological tradition. A founding event was initiated by a group of Hungarian, South African and Dutch theologians. Representatives of the Reformed world in North America and Australia were also involved in the founding event. From the outset quite a number of Korean and Indonesian scholars were involved as well, later on joined by theologians from all parts of the world.

IRTI’s main focus has been upon ‘Living Reformed Theology.’ This means that IRTI has always acknowledged the historical roots of its own confessional tradition, yet has studied this tradition always with an eye towards the future of Reformed theology and with new contexts and questions of today’s world in mind. Hence, the biennial international conferences have addressed topical societal issues that challenged Reformed theology, such as ‘Freedom,’ ‘Faith and Ethnicity,’ ‘Christian Faith and Violence,’ ‘Unity of the Church,’ ‘Calvinism and Law,’ ‘Liturgy and Ethics,’ and ‘The Calling of the Church in Times of Polarization.’

The recent conferences in Sarospatak (2013, 90 participants), New Brunswick (2015, 50 participants), Hong Kong (2017, 90 participants) and Amsterdam (2019, 100 participants) showed a gradual increase of diversity both in national, cultural and confessional backgrounds and in gender. The preparations for the 14th biennial IRTI conference at Duta Wacana Christian University in Yogjakarta have already started, but had to be postponed due to the current pandemic. The 14th conference will be online, June 2022.

When dr. Bram van de Beek joined the Faculty of Theology at VU Amsterdam, IRTI was able to develop an international one-year master degree program in living Reformed theology that existed between 2001 and 2013. Through financial support of VU University, IRTI provided some limited scholarships for international students who needed them to study in Amsterdam.

Through the network and the then master program and now Graduate Schools of FRT VU and PThU many students continued with doctoral research and since then a significant number of students, directly linked to the IRTI network, defended a PhD at VU University or PThU, many of them were able to enter into academic positions in theological institutions worldwide or becoming leaders within their faith communities.

Based on a contract with IRTI, publisher Brill started publishing the peer reviewed Journal of Reformed Theology (JRT) in 2007, and took over the publishing of the Studies in Reformed Theology (SRT), both with international editorial boards and now having become recognized as the most prestigious academic publications with a clear Reformed/Presbyterian signature. Eddy Van der Borght has been editor in chief of both publications since 2007. In 2022 Philip Ziegler (University of Aberdeen) and Pieter Vos (Protestant Theological University) have taken over as the journal’s new editors-in-chief.

The Dutch theologian prof. Bram van de Beek (VU University) was the director during the first ten years of existence. In 2005, prof. Martien Brinkman, holder of the chair of intercultural theology at VU University, served as IRTI’s director, until his retirement in 2015.

In 2011, the Protestant Theological University (PThU) became co-‘share holder’ of IRTI investing in its structures, finances and activities, next to the Faculty of Religion and Theology (FRT) VU. A management team with four members (two representing PThU and two representing VU) and a secretary was put in place. In 2015 prof. Pieter Vos, from the Protestant Theological University, became director of IRTI.

Between 2001 and 2016 IRTI, together with Moluks Theologisch Beraad and the Faculty of Theology at Stellenbosch University, organized autumn conferences in Houten. Between 2001 and 2015, IRTI organized biennial summer schools with the New Brunswick Theological Seminary, in the Netherlands. Since 2016 this biennial IRTI summer school in Amsterdam has developed into a major activity with some 50 participants, including teaching staff, from USA, the Netherlands, Hungary, Romania, and several other countries, with institutional support from and cooperation with New Brunswick Theological Seminary, Sárospatak Reformed Theological College, Debrecen Reformed Theological University, Protestant Theological Institute (Cluj Napoca), and Moluccan Theological Seminary (Houten). Due to the Covid-19 pandemic, the IRTI summer school of July 2020 had to be cancelled.