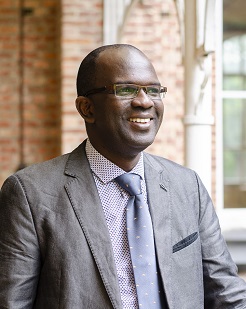 On July 1st, 2019, Dr J. B. Bangura (Bosco) has started working at the Beliefs department of the PThU in Groningen as a Senior Researcher, African Pentecostalism and Migration in Flanders & the Netherlands. Read on as he introduces himself.

I taught for many years at The Evangelical College of Theology in Sierra Leone, and briefly in Liberia, Ivory Coast, Uganda and South Africa. After a joint doctorate at the ETF and the VU, I combined postdoctoral research with hands-on pastoral ministry among African diaspora Pentecostal faith communities in Brussels and Antwerp, Belgium.

Flanders, the Netherlands and Europe

I am married to Susan and we have one teenage son, both presently residing in South Africa. As of 1st July 2019, I joined the PThU on a joint one-year appointment with the ETF Leuven, Belgium. During this time, I will continue working on African Pentecostalism (an important section of migrant Christianity) in Flanders, the Netherlands and Europe; work for website project “African Christianity at your Fingertips”.

Centre for Theology and Christianity Worldwide

I will also help set up a new Centre for Theology and Christianity Worldwide. While waiting for my family to join me in Leuven where I now live, I will travel weekly to work with colleagues of intercultural theology at PThU Groningen. I hope to bring my Pentecostal faith convictions to bear upon and dialogue with other Christian confessions and contribute to training the next generation of Pentecostals for church and society in the Netherlands and beyond.